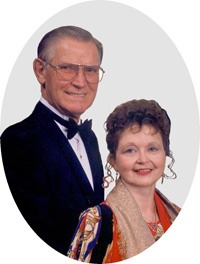 Webster’s Basic English Dictionary defines a hero as “a person admired for great deeds or fine qualities.” A hero is also a person who shows great courage. Merle Hamilton was such a man. A lion of a man, Merle blazed a trail that most would have avoided. Hard work was his work ethic and he was always a man of principle. A leader in the San Diego Community, Merle never asked a person to do something that he wasn’t willing to do himself. He was always fair and just. A cherished relative, friend, and neighbor, Merle was always at the ready to reach out with assistance, advice, or friendship to those around him. He had the courage to always do the right thing, even though it wasn’t always the easiest path to choose.
Born and raised in South Dakota, Merle Hamilton, yearned for adventure, moved west, and spent three years serving his country aboard the USS Intrepid Aircraft Carrier during World WarII. In July 1948, he moved to San Diego, and was selected to assist with the opening of Greenwood Memorial Park’s mortuary in December 1948. As General Manager, with complete administrative responsibilities and including a staff of 150 people, he built it into San Diego County’s leading mortuary. His experience included union negotiations, budgeting of two million dollars per year, advertising and public relations, purchasing, long term planning and development. When Greenwood merged with International Funeral Services (IFS) in 1970, Merle served a brief period as assistant to the new President of Acquisition. After IFS merged with Service Corporation International in 1981, Merle served in their Cemetery Division Headquarters until his retirement in 1986.
Merle Hamilton first met Marie in 1968 when he was with International Funeral Services (IFS). Their friendship grew as Merle helped Marie to build Scriber Award Designers in a fast-changing business environment. The hallmark of the company was absolute integrity, knowledge of products,
an uncommon commitment to deliver better than expected awards, and keeping technology abreast to improve efficiency and reduce labor requirements while keeping quality in check. Married in 1989, Marie stated that it was Merle’s support, encouragement, counsel, expertise with clients’ consistent orders, and CPA negative attitude when she gave free awards to charities, are an integral part of who she is today.
Merle’s longtime service to San Diego included serving as President of the San Diego County Funeral Directors Association, President and Board Member of Jackie Robinson YMCA, President of the Donated Organs program of San Diego, President of the San Diego Track and Field Club, President and Board Member of the Pacific Southwest Association of the Amateur Athletic Union, President of the Park West Homeowners Association, President of the San Diego Chapter of the American Heart Association (8 years), Board of Directors (8 years) of the California State Heart Association, President and Board Member of the Coronado Cays Homeowner Association, and as a member of the Advisory Board for the Burn Institute of San Diego.
Merle also served on the Marian Catholic High School Board and was a financial advisor to the late Dr. Estelle L. Kassebaum for over 4 years. After Dr. Kassebaum’s death in 2006, he served as a board member for the Dr. Estelle L. Kassebaum Memorial Scholarship Program until he passed to his eternal reward on September 25, 2007.
Merle’s efforts and dedication left a legacy of selfless service and love that has not only left an indelible mark on the State of California and the City of San Diego, but has become a part of Mater Dei Catholic’s tradition, and is reflective in the work ethic that is evident in so many of our faculty, parents, students, and friends today. In recognition of his tremendous contribution to our school and to the San Diego Community, Mater Dei Catholic High School is pleased to introduce The Hamilton Service Award. This award will continue to honor those who carry the torch of love and selfless service forward, following in the footsteps of those who serve selflessly and make the difference daily.